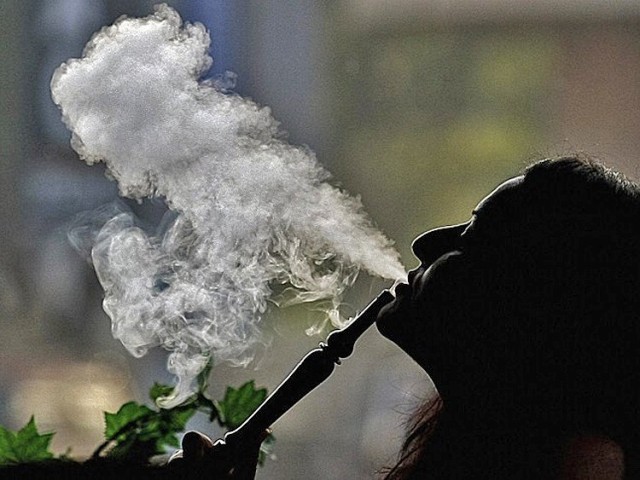 I am all up for mixing modernity with religion and bringing religion up to par with modern standards, but what about mixing religion with culture and conditioning? PHOTO: AFP

There is a cafe near my university which is frequently visited by students. It has groovy music and plenty of shisha. From the very visible public display of affection to the “immodest” dressing of students – it is a conservative’s nightmare.

I am sure you can picture the place in your head by now. So one particular day while I was there with my friends, a waiter suddenly rushed towards the sound system and switched it off.  One of my friends joked that maybe the Taliban had finally heard of this place and attacked.

However, that concern was rapidly waived as girls sitting in the room scrambled to set their dupattas (head-scarves) straight and cover their heads while the more scantily clad ones looked around sheepishly. Even the guy sitting across from us, who was periodically making smoke circles, put down the shisha pipe and sat up attentively.

It was Azan time.

Within a matter of seconds, the general outlook of the room had changed, smokes were put out and girls were sharing dupattas to cover their hair.

Before calls are made for my head, I must say there is nothing wrong in showing reverence for the Azan, in fact that is what most of us have seen our parents do. However, somehow I am sure that when our mothers covered up for azan they weren’t sitting in a cafe smoking shisha and holding hands with their boyfriends.

I am all up for mixing modernity with religion and bringing religion up to par with modern standards, but what about mixing religion with culture and conditioning? For me, the putting out of cigarettes and covering up for Azan has more to do with tradition rather than religion itself. What about the fact that the Azan is just a call for prayer and the actual way of respecting it is by saying prayers and not by pushing the mute button on the remote control?

However I digress, and just so I am absolutely clear, whether you pray or not is completely your own business.

I am sure all of you would have noticed how during Ramazan our television show hosts turn into born again Muslims. There’s this great competition to prove who’s the holiest Muslim of all and the participants also include morning chefs, comedians and singers, all trying to wear their religion as overtly as possible.

Tolerating the likes of Amir Liaqat is hard enough on odd days but to see him hold our television hostage for an entire month while mixing ostensible peace messages with genuine hate speeches is strictly a regurgitating experience. The most ironic thing is how straight after iftari (breaking of fast at sunset) on chand raat (night before Eid) the prayer caps and the long white dupattas are magically transformed into revealing latest fashion trends.

Maybe the devil is really unleashed at the end of Ramazan – or is it just a Zionist conspiracy. I don’t know, you tell me?

The point that I am trying to make is that these little contradictions breed hypocrisy and can lead to an identity crisis. How can we forget the curious case of Ali Azmat, our lone true pop star, who jumps from jihad to Zionism to capitalism and finally to Sufi music all in one sentence.

The worrying thing is that this pattern is reminiscent of a significant portion of our youth. The youth that talks fondly about the likes of Mohammad bin Qasim and Che Guevara and thinks that a democratic caliphate will solve most of our problems as true democracy is just something that liberals talk about to tease Uncle Zaid Hamid.

The alarming thing is that it is in this confused youth that our revolutionary leaders find their greatest political capital. It is only because of this paradox that people like Imran Khan continue talking about nonsensical terms like an Islamic welfare state, and get applauded rather than being questioned as to the specifics of it.

Switching off music or saying “Allah Hafiz” instead of “Khuda Hafiz” is certainly not the disease, but only symptoms of one. The disease manifests itself when these little quirks turn into discrimination and prejudice.

Somehow, I am convinced that between a non Khuda Hafizian and an I-don’t-care-how-you-greet-me person, the journey towards bigotry is much convenient for the former as compared to the latter.

Correction: An earlier version of this post incorrectly cited Ali Zafar, where Ali Azmat was referred to.