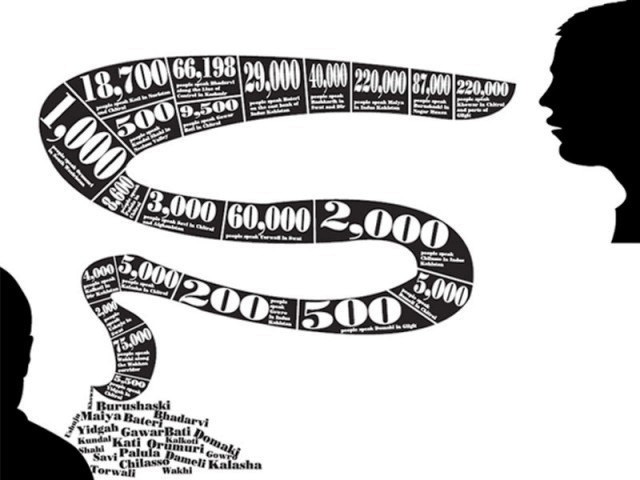 How many more generations can Punjabi last before the original dialect just vanishes from the planet? DESIGN: FAIZAN DAWOOD, PHOTO: FILE

Do you understand what this Punjabi idiom means, or do you need a translation in English first? The literal translation may be “one just woke up and the other one is partially sighted!” but that isn’t what it means.

This funny phrase refers to a person who has just woken up and then on top of their disheveled appearance is cross-eyed as well. It is used “icing on the cake” in English.

Most people wonder why everything in Punjabi sounds so comic? Maybe our ancestors just appreciated humour.

If you belong to a Punjabi speaking family and couldn’t understand then this is proof that our language is teetering on the brink of extinction. How many more generations will it be before the original dialect just vanishes from the planet? Nobody in my circle of friends has a Punjabi vocabulary like my parents have. If the trend continues, than it’s not really hard to predict the outcome.

The Punjabi language is not the only one facing this acute hazard of becoming extinct. According to the World Resource Institute, out of 7,000 unique languages spoken in the world today, nearly half are likely to disappear this century, with an average of one lost every two weeks!

Imagine the sound of Punjabi and the rich cultural heritage it boasts lost forever.

You may think the notion is absurd or maybe do not see it happening in your life time.

So, what’s the big deal if there isn’t a single person speaking Punjabi at the end of this century?

Aren’t we better off with a universal language?

But imagine our offspring speaking only English (or Chinese for that matter). Language is not just the encoding and decoding of information among people but it brings with it the norms, identity, traditions, history and values of a society. When we move to a foreign country, we adapt to other languages and our lifestyle also changes.

While I believe different languages can co-exist within a society and this might be the ultimate solution to save the endangered ones. We spend so much time learning so many random things, but what I fail to understand is, why not make a little effort to learn our own mother tongue? Why not strive to save our languages, so that history may not hold us responsible for confining these languages only to the books kept in the unfrequented corners of old libraries.

I can’t describe the delight I saw on the faces of my elders when they came to know that at least somebody from their descendants was interested in learning the language they spoke all their life and are so proud of.

Languages need not to be taught, but should define who we are, which means we need to inculcate a sense of responsibility and understanding explaining why a mother tongue is important for the next generation – why speaking their own language will earn them more respect.

The point here is not against the learning of other languages but the emphasis is to keep our own culture alive. I believe that we become the unintentional ambassadors of many things involuntarily, but by fate and being the heirs of Pakistani and Eastern culture at large, we owe it to our region to uphold its worthiness and value, and keep it bustling with progression and development for our future generations.

The author is an Entrepreneur and a final year student of Electrical Engineering at NUST Islamabad. Interested in literature, culture, music and robotics. He tweets @affanch