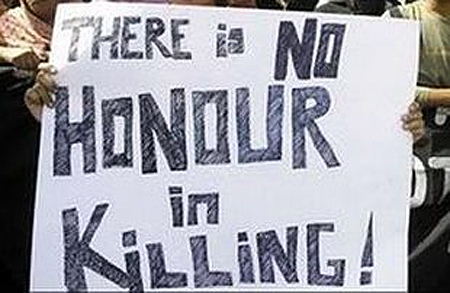 According to a study published in the Middle East Quarterly in 2010, the number of honour killings has escalated from 1989 to 2009.

I recently came across a picture from Sargodha, which showed a young man sitting on a charpoy with a knife in his hand and blood on his shalwar. He was posing like a hero. His expression was serious. There was no regret on his face or fear, maybe a hint of pride.  The guy had not taken on any terrorists or robbers single handed. No. He had killed his young sister, who had married without the permission of her family a year before.

The man had gone to his sister’s house and convinced her to visit their family home so that bygones could be bygones. When she arrived the next day, he had slaughtered her. The neighbours heard her screams and called the police. That was when he had stated that he had done it to protect the family ‘honour’.

Though there are some who argue that it has nothing to do with religion – since the phenomenon also exists in India, Bangladesh, Brazil, Ecuador, Egypt, Sweden, Turkey and Uganda to name a few – the fact remains that most such acts are committed in Muslim countries. But even in non-Muslim countries, the prosecution rate and the sentences awarded, in case of convictions, are disproportionate to the brutality of the act. The low rate of prosecution is usually because the perpetrators belong to the same family. The sentences are relatively lenient because in a majority of the countries no particular law exists to deal with the heinous crime.

According to a study published in the Middle East Quarterly in 2010, the number of such killings has escalated from 1989 to 2009. The worldwide average age of the victims is 23; a little over half of the victims are daughters and sisters while about a quarter are wives and girlfriends of men who commit the crime.

The warped notion of honour that seems to have developed, without a clear pattern, stems most likely from the ideas that women are a lesser being and properties of the ‘superior beings’, men. The concepts are silently supported by the social, political, religious and economic systems of the society. Complicity by other women and the community reinforces these concepts, while strengthening the view that violence against family members is a family issue not a judicial one. As a result, the definition of what defiles ‘honour’ has become very loose. The consequence: women are treated as commodities and have no say about their own lives or a right to choose and the ownership rights are most at stake when marriage comes into play.

Most unfortunately, even the judiciary tolerates this practice under the doctrine of “sudden and grave provocation”; honour killing often attracts a much lesser sentence than the normal penalty in a murder case. In the circumstances, with express societal and implied judicial sanction, the practice has perpetually grown into a menace. The only way to control the menace is to devise a multi layered strategy aimed at long term goals such as changing the societal concept of family honour through education and integration, and short term goals such as providing swift justice to the victims and restricting the doctrine of ‘sudden and grave provocation’ to within reasonable limits.