Capitalism: A deal with the devil 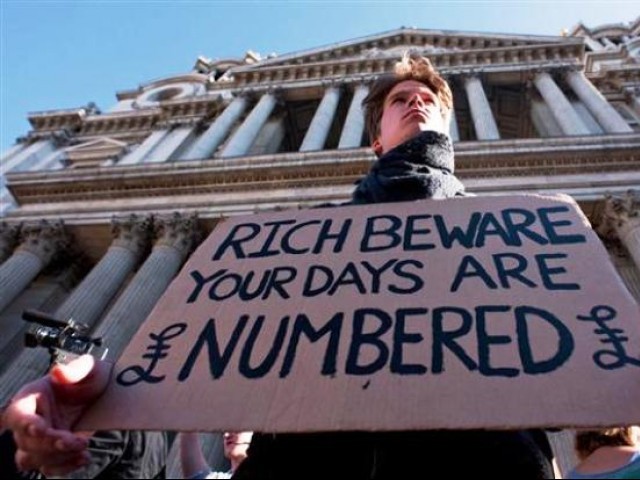 Unless we get rid of corruption, bigotry and nepotism which has crept into every fibre of our social fabric and create a fair and just system, we will continue having an imbalanced society, with opportunities limited for all. PHOTO: AFP

It has been the greatest success story in the history of mankind. It has fuelled unprecedented economic, social and cultural growth, alleviated millions of people around the world from poverty and economic hardship, and ushered in a new era of technological innovation.

However, while none of the political bigwigs and the so-called pariahs of the system care to admit, capitalism has created just about every problem in our world and the majority of its seven billion plus people face daily. It can be argued that terrorism global financial crises, famines, droughts and environmental changes are all the byproducts of the relentless need and greed for money, consumerism and a more exuberant lifestyle that our planet’s limited resources simply cannot sustain.

Such a system cannot continue in its present mould, and we are seeing people react to what can only be seen as robbery in broad daylight. Men like Richard Dick Severin Fuld – the longest serving CEO on Wall Street and the man responsible for the collapse of his company Lehman Brothers – made millions of dollars through complicated and illegal banking practices, and still managed to get a hefty, tax-free severance package. He did not face any criminal charges, even though the bankruptcy of the institution triggered a near global collapse of the money markets. One has to wonder, is it because the bosses of these massive companies are aligned with politicians in some way? Certainly the campaign money to run for the Senate, the House of Representatives or the presidency in the United States comes from these companies in return for favourable tax policies.

Until and unless we get rid of the corruption, bigotry and nepotism which have crept into every fibre of our social fabric and create a fair and just system, we will continue having an imbalanced society, with opportunities limited for all and sundry to make a decent living.

When morality comes up against profit, rarely does profit ever lose. The challenge is to distribute this profit evenly for the benefit of all.

A sub-editor at The Express Tribune who has a keen interest in national and international politics, social issues and sports.

The tears of twenty million people