What next in Pakistan’s media (r)evolution? 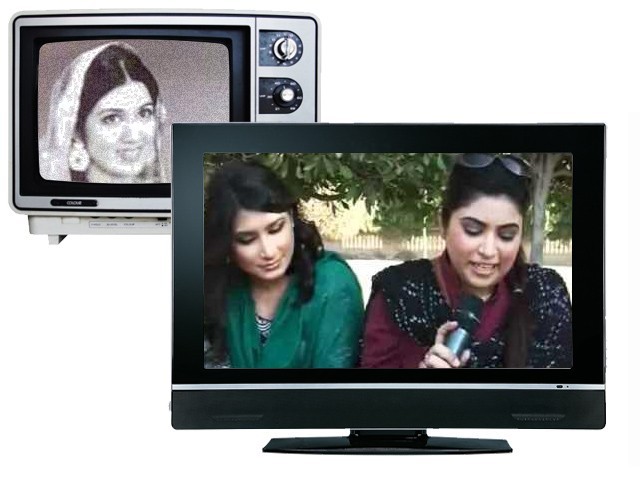 Around forty years ago people had a problem with women on TV not wearing a dupatta on their heads – almost half a century later, we haven’t moved forward.

We are no strangers to the evolution of Pakistani media. It has come a long way since its inception and according to a unanimous consensus, it is here to stay.

What we have also witnessed on the other hand are major bloopers in the form of “leaked” videos that have the likes of Amir Liaquat, Mathira and Maya Khan on tape doing things that are questionable at the very least. Issues like these have brought the fact to light, that even though Pakistani Media is progressing – nay, even thriving, it is not short of its share of loopholes. We don’t even know whether it has a progressive direction. A large majority of the public would like to agree that the focus on the quality of a program’s content has certainly dwindled, what with the obvious focus of many programs towards the supernatural or even surreal.

Speaking at the colloquium on “Television in Pakistan”, held at SZABIST this Saturday, Rahat Kazmi, a well known academician and professional actor, spoke about where he thought the Pakistani TV is going wrong. Science and technology, he put forth, gets no attention or coverage on the programs that are hosted in local media and everyone in attendance tended to agree. I’d be surprised if they didn’t. When was the last time you watched something on television that motivated you to go back and cross check a scientific fact or made you aware of newer theories and innovations (the ad on Sauna belt aside, of course)?

You can definitely call in on a program and find a workable “todka” for any and all of your problems but rarely will you find experts from the field giving proven solutions and supporting their recommendations through facts. Things like tarot cards, followers of black magic and horoscopes, on the other hand are given endless coverage by the media. You’ll find countless number of people calling in and asking the “guest” of a show to record their personal details on a computer and foretell the rest of their life on earth and whether or not are they going to have a child in the next two days. The insanity of the situation can’t even be put into words.

So-called reality based shows, very obviously derived from supernatural and ghost stories focus on titillating the viewers as opposed to giving them information or even meaningful perspectives on the situation. A very recent program on TV featured the hostess in a graveyard and for almost thirty minutes, excluding the ads had her talking about how afraid she was about being in a graveyard. Even though some of the programs try to appear “balanced” by inviting panelists ranging from various fields, the bias of the hosts and anchors come into play when considerable attention and air time is given to the practitioners and believers of the supernatural, as opposed to doctors, scientists and thinkers.

We’d like to live in a bubble where facts and theories don’t exist or it is just popularly made known that it’s thought we think like that. We’d rather watch Hamid Mir accusing a new person every week of committing some sort of a sin while we gloat about being virtuous ourselves because no matter what we do, we aren’t stripping for a magazine cover in India. There are hardly any programs on television these days that lead you to question our dogmas and beliefs, which as a result are apparently become narrower and stringent because they are not supported by research and new developments. Around forty years ago people had a problem with women on TV not wearing a dupatta on their heads – almost half a century later, we haven’t moved forward. People should really be judged about the kind of things they have a problem with. What would we be then? The bare head avengers?

The point is, our television industry has tried but not succeeded, in making people ask the right questions. Public policies are only made known but rarely ever questioned or argued in the media. Kazmi talked about how the government had decided to make Chinese compulsory as a subject in schools. Did the media talk about the improbability of such a policy? Do we really have enough teachers teaching the language? Are we well-versed in our mother tongue to start with? These were important questions that nobody appeared on the television with.

Having said that, it is important to understand that, having these issues recognized is a sign that they are going to be addressed in the near future. If the public is aware of where our industry is going wrong, it’s not long before the people running the show will too. As for me, I truly wait for a time when there would be more thinkers, authors, film makers and scientists on TV than failed dentists.