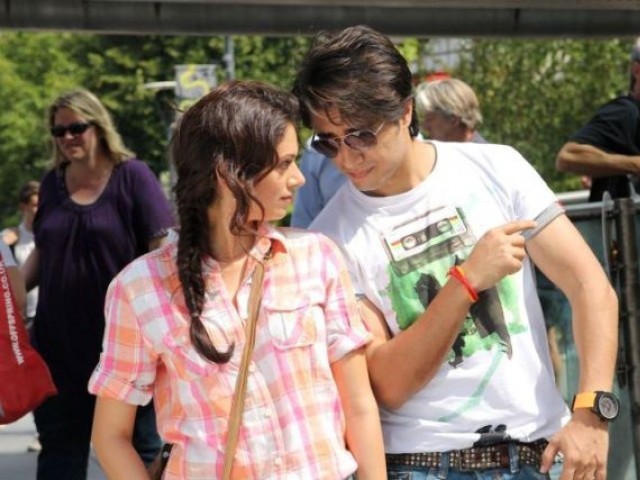 LPNY is exactly the way love stories should be made – trendy, urban and fairly realistic. PHOTO: PUBLICITY

Love stories have been told again and again. Every now and then, a Jab We Met comes around – a film which that rises above the predictable. London Paris New York (LPNY) is one of those special films.

Set in three lovely cities, this is story of Nikhil (Ali Zafar) a happy-go-lucky boy and Lalitha (Aditi Rao Hyderi) a simple, nerdy Madrasi girl, who fall in love with each other thrice in six years.

And that’s it. That’s all the movie is.

No impediments, no pretentiousness, no preaching, no ‘zaalim samaaj’ and not even a supporting cast. The only third person who has a line to say in this movie is Dilip Tahil who appears during the last ten minutes.

The first few scenes of the film give an impression that its similar to When Harry Met Sally – which has already been done in Bollywood (Hum Tum), however, LPNY is a different story with a different treatment.

In fact, the film closer to 500 Days of Summer and also has a peculiar similarity with Roger Dodger because of  the heavy dependence of dialogues between the two main characters. Nonetheless, LPNY is a lot simpler than any of these movies. Instead of relying on twists and complications of the plot, it thrives on performances and the affability of the lead characters.

The strongest point of the film is the fact that it is short – less than two hours. It doesn’t drag at any point and remains fairly gripping for a simple story.

The first part of the story, which takes place in London takes some getting used to especially the extrovert Nikhil. As the film moves forward, the entertainment and the engagement levels go up. The part shot in Paris is better than London but New York simply steals the show. The climax is beautiful. Watch out for the penultimate sequence at Hudson River; best scene of the movie. The film could have finished at that point and it would have ended at a high second to no other love story of recent times; no complains though.

Ali Zafar’s acting is dynamite – 5,000 tons of talent I must say. Besides being the lead actor in the film, he is also the music director, singer and lyricist.

While he has done well on all the fronts, his acting takes the cake. In Tere Bin Laden, I was convinced of his comic timing but weren’t sure on his ability to handle emotional scenes as TBL had none. LPNY has shown the audience his flexibility, range and ability to carry the film on his shoulders. With amazing scene presence and charm, he put up a great show. His comic timing in London segment, impatience in Paris and outburst at the climax in New York, all were fantastic performances.

Aditi Rao Hyderi is not far behind either. Her portrayal of Lalitha and the transformation the character goes through are extremely natural andauthentic. Her adorably shy demeanor in the first story, sultry looks and heartbreak in the second and mature conduct in the third are absolutely brilliant.

She looks gorgeous in the rain sequence in London and steals the hotel room scene in Paris which, of course, is a defining moment in the story too. This was definitely her best performance after small roles in Yeh Saali Zindagi and Rockstar.

The third star of the film is Anu Menon, who too has worn multiple hats for this venture. Not only has she written the script and the dialogues but has also directed the movie. Had I not known, I would have thought LPNY is an Imtiaz Ali (Jab we Met) film and that’s a huge compliment for Anu.

She has handled intimate scenes between the lead pair well. While the dialogue can be cheesy at times that is a requirement of Nikhil’s character. Anu hasn’t gone over the top and has kept the film as close to reality as possible.

The words ‘unrealistically realistic’, fits London Paris NewYork. I am sure several guys have gone through what Nikhil goes through on a bench in London.

All in all, LPNY is exactly the way love stories should be made – trendy, urban and fairly realistic. It takes great courage to make an entire film for only two characters, that too played by new comers. Even if this movie doesn’t win bumper opening at the box office, it will increase the audience size for Ali, Aditi and Anu significantly.

It is a beautifully made artsy commercial film which deserves a successful run.