Geo down, ARY down… government down? 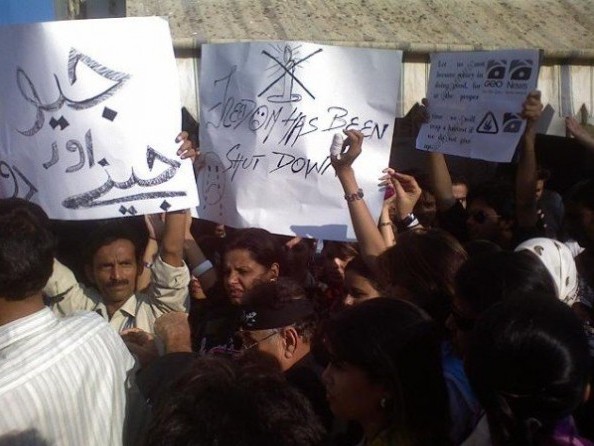 Protesters young and old came out on the streets in 2007, to protest former President Musharraf's media blackout. PHOTO: JAHANZAIB HAQUE

A senior journalist and past colleague from Geo days woke me in the morning with the following SMS:

Are you getting 2007 flashbacks?

I promptly sat up, snapped open my laptop and began scanning local news websites to check what he was referring to. I got to The News and waited for my page to load.

The page cannot be displayed

This webpage is not available.

So it has finally happened. Democracy’s best revenge has turned on the media en force, blocking the Jang Group’s website, burning copies of their newspapers in the street, blocking their channels and taking out protests to clamp down on the media. For those whose memories run short, this is the same democratic tour de force which toppled el Dictator and decried his ‘black laws’ against the media. Well, at least el Dictator had laws – in the ongoing crisis which has seen both ARY and Jang group targeted, we are not told who is taking what action against the media and on what grounds (though we all implicitly know who is behind this).

There is a lot to be said here about a free press being an integral pillar to the operation of the state, especially our country where corruption runs rampant and the media is currently an informal policing tool. There is also a lot which can be said about the media’s need to coordinate with the government to formulate a code of ethics which should be agreed upon and enforced by both parties, failure of which can result in blockage of a channel, perhaps. But given how shortsighted we are as a nation, let me propose a simpler fact that has come to haunt our governments: