Do I have the right to remain Ahmadi? 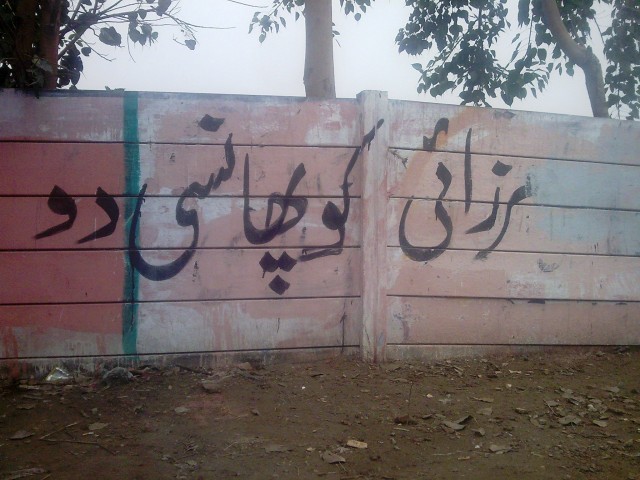 Do Ahmadis only have the right to remain silent? PHOTO: FAHEEM YOUNUS

In 1966, nearly 180 million people in the US received Miranda rights – the right to remain silent to avoid self-incrimination.

Half a century later, a religious community in Pakistan, another country of nearly 180 million people, is facing a rather caustic version of the Miranda rights. They don’t have the right, but a duty, to remain silent.

The religious group is the Ahmadiyya community.

Is it not true that the right to remain silent assumes a right to free speech in the first place? Something the Ahmadis have been long deprived of?

Unlike the Miranda rights, this ‘right’ to silence is by definition, self-incriminating. Try to voice your opinion as an Ahmadi and you may land in jail under section 295-B/C of Pakistan’s penal code offers pending a three year imprisonment simply for exercising your right to free speech. Try voicing dissent, and you may end up in a graveyard. Even after death, the mullah menace has the right to white wash Quranic verses like ‘God is gracious, ever merciful’ from an Ahmadi’s tombstones.

Consequently, hundreds and thousands of Pakistani Ahmadis, including myself, have tearfully migrated to other countries, but not without sustaining one final jab; the passport application.  It requires 97% of Pakistan’s Muslim population to complete a declaration stating that not only do they consider all Ahmadis as ‘non-Muslims’ but they also declare the founder of Ahmadiyya Community to be an ‘impostor’. While I have never met a Pakistani Muslim who refused to sign this absurd declaration, Ahmadis do scratch it out. Their passports are thus stamped with the word ‘Ahmadi’ and the plight of their right to remain silent continues.

For decades, the Ahmadi perspective was systematically hushed under the pretense of ‘sensitivity’. But organizations like Amnesty International are now calling it, ‘a real test of the authorities’. And 0nline newspapers and opinion pieces by courageous Pakistanis have started challenging the suffocating status quo.

For the Pakistani government, there is a way to be good again. Rein in the mullah, stop defining who is and who is not Muslim, and subject the medieval anti-Ahmadiyya laws to a modern paper shredder. Give Ahmadis the right to free speech before offering them the right to remain silent.

Finally, the Ahmadiyya diaspora is choosing to expose this oppression by speaking up. The mullahs and their proxy politicians will have to deal with the bitter truth.

Maybe a glass of Shezan could have helped to sweeten the bitterness. But then I guess that’s just too Ahmadi.