Obama’s apology and the ashes of the Holy Quran 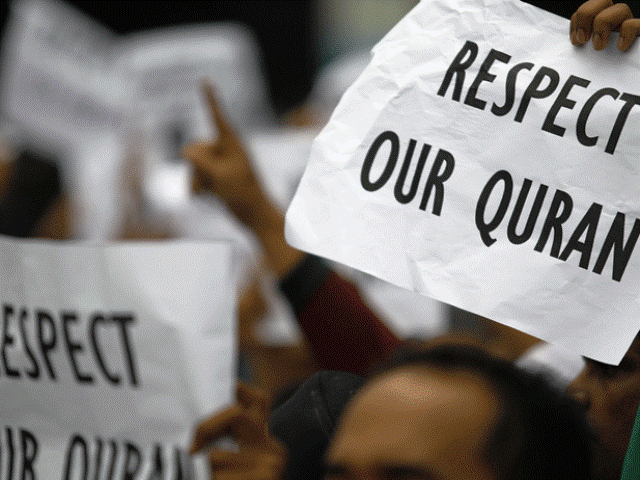 Sadly, it was not an isolated incident, and it could very well happen again. PHOTO: REUTERS

Last week, as the horrible news spread that US military officials had incinerated copies of the Holy Quran at Bagram airbase, American military and civilian leaders quickly said they were sorry.

NATO commander General John Allen and US President Barack Obama both apologized to Afghan President Hamid Karzai. A top US defense official, Peter Lavoy, even appeared at a Washington DC area mosque to offer his apologies to worshippers during Friday prayers.

Yet Washington also went beyond apologies. Allen announced an investigation into the affair, and the military pledged new training for its personnel.

“These actions do not represent the views of the US military,” insisted defense secretary Leon Panetta.

One need not think long to recall other desecrations and brutalities committed by the US military in recent years. Just weeks ago, a video surfaced of American soldiers urinating on dead Taliban soldiers. In 2010, revelations emerged, that a group of servicemen had executed random Afghan civilians, posed for photographs with the corpses, and then severed body parts to keep as trophies. Back in 2005, the Red Cross alleged that American personnel, at the Guantanamo naval base, had ‘disrespected copies of the Quran’ (though US media later retracted reports that actual desecrations had occurred, including the flushing of a Holy Quran down a toilet).  Meanwhile, Abu Ghraib and Haditha have become synonymous with US military misdeeds in Iraq.

This may not be a long list, but it is a list that has no business existing at all, and yet it may accumulate a few more iniquitous items. Consider the present plight of American soldiers. In a nation without a draft or any sort of compulsory military service, those deployed constitute a tiny minority of the US population. With so few personnel to serve America’s many military needs, repeated duty tours are the norm, leading to taxed, exhausted soldiers. In Afghanistan, they find themselves under immense pressure to attain results, with the clock ticking down to the withdrawal of combat forces by 2014. Such strain is compounded by the shifting US strategy in Afghanistan, which is now concentrating combat operations in the eastern portions of the country, where the insurgency is at its strongest.

Militaries often harbor a few sadists in their ranks (think of US Staff Sergeant Calvin Gibbs, ringleader of the aforementioned ‘kill team’ that mutilated Afghan corpses). Yet with US military resources stretched thin and personnel stressed, even an upright and law-abiding soldier could crack. Or, as was seemingly the case last week in Bagram, overwhelmed or improperly tasked personnel could make an administrative mistake, ‘religious materials were unintentionally mishandled’, according to a White House spokesman, with reprehensible results.

Then there is the issue of prejudice. It is folly to accuse the US military of being an anti-Muslim institution; just as it is wrong to allege that America is an anti-Muslim nation (I noted last year that the FBI’s hate crimes statistics report significantly fewer incidents of anti-Islamic bias then those against Jews, African-Americans, and homosexuals). Yet in America, anti-Muslim prejudice frequently flares. Just the other day, the New York Post sparked an uproar by publishing a cartoon depicting Muslims as duplicitous terrorists.

Ever since President Harry Truman integrated the US armed forces in 1948, many have lauded the institution as a symbol of tolerance — a perception strengthened by last year’s decision to repeal the ‘don’t ask, don’t tell’ policy involving gay soldiers. Yet the tragic case of Danny Chen , a Chinese-American, allegedly driven to suicide last October, by repeated racial slurs perpetrated by his fellow soldiers in Afghanistan, demonstrates that the military is not immune to prejudice. Predictably, some Muslim-American troops have claimed harassment about their religious beliefs, and especially after the deadly shooting spree waged by Nidal Hasan, a Muslim-American military psychiatrist at Fort Hood in Texas.

To its credit, the US military typically responds promptly to cases of wrongdoing with investigations and legal proceedings. And given the unrelenting outrage manifested by Afghans following the Quran burnings, violence has killed more than two dozen Afghans and several Americans, and the affair has blown the Kabul-Washington trust deficit wide open; the Pentagon will surely take extra steps to ensure that no Quran is ever again desecrated under its auspices.

Being the world’s sole superpower involves numerous costs. These include overstretch, that can cause soldiers to crack or to make mistakes of great magnitude, and the exportation of prejudices from home onto foreign lands and battlefields bearing the US military footprint.