The thick blood of a journalist 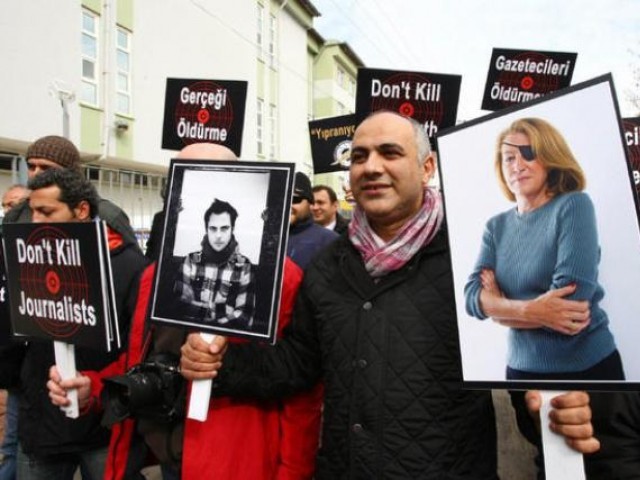 Tragic as the deaths of the American and French journalists are, they bring into focus the kind of double standards that we see in the western world. PHOTO: AFP

Two journalists died on February 22, 2012 in the Syrian city of Homs after Syrian government forces shelled the house that they were staying in. One was an American and a reporter for the British paper, The Sunday Times, while the other was a 28-year-old Frenchman who had his own photography agency.

The American journalist, Marie Colvin, was a veteran war correspondent and had just the night before her death sent a detailed dispatch on various western news channels about the deteriorating situation in the city, believed to be the stronghold of the Syrian resistance to Bashar al-Assad.

The French photojournalist, Remi Olchik, had been a university student as recently as 2004 but since entering the field had made quite a name for himself. He had covered conflict in the Democratic Republic of Congo as well as various natural disasters and the Libyan revolution of 2011. One of his photos of a Libyan resistance fighter sitting on a sand mound amidst a burning field of mangled trucks and artillery guns won an international award.

Tragic as the deaths of the American and French journalists are, they bring into focus the kind of double standards that we see in the western world. For instance, for the past few months, Syrians making up the resistance to Assad’s rule have been ruthlessly dealt with by his security forces and hundreds have either just disappeared or been killed. This has happened as the rest of the world looked on.

However, now with the cold-blooded killings of these two western journalists, some governments are now pressing for greater international action in Syria. While one would understand, say, Paris being vocal now because one of its citizens was killed, it could have been more vociferous in its condemnation of the heavy-handed tactics of the Syrian regime earlier when Syrians were being put to the sword.

Unfortunately, if international action now takes place to oust Assad, there will be a lasting perception certainly in this part of the world that this was done because the blood of two westerners was thicker than that of hundreds of Syrians.

A sub-editor for the Opinion desk of The Express Tribune

International aid and development are not synonymous

Autism: A league of their own