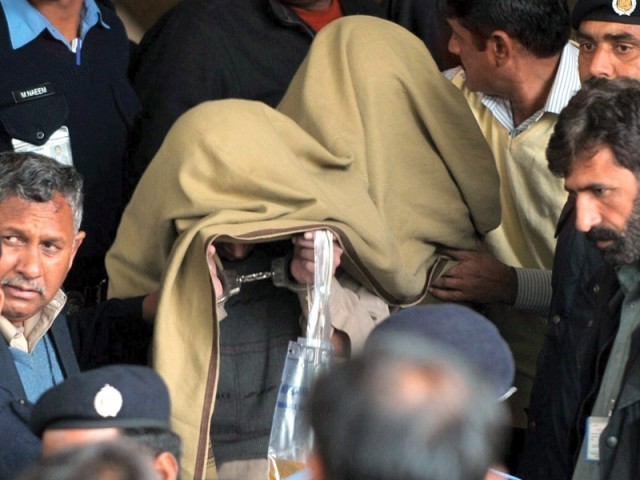 Policemen escort men, seen draped in a shawl, after an appearance at the Supreme Court in Islamabad. PHOTO: AFP

For many the media is a watchdog, but some want to make it a scapegoat to achieve their short-term personal goals. The prevailing crises in the country have also increased the challenges for the media to maintain its credibility and impartiality.

I have no words to highlight the threats made to media people by the Difa-e-Pakistan Council, or certain terrorist groups. But today I still have something to say.

One of the country’s top lawyers, defending the prime minister in a contempt of court case, also accused the media of negatively portraying the issue. “Don’t get into this controversy, they are half-literate,” was the reply of one of the honourable judges.

To report the plight of the missing prisoners was another test for the media. Reporters who had assembled outside the courtroom of a missing persons hearing were ‘advised’ by intelligence officials to “report the issue in a balanced way”. However, when the reporters asked them (the intelligence sleuths) of their own conduct with the ‘terrorists’, they had no answers.

I was there and will never forget the agonies of the missing prisoners who were brought before the court. Most of them appeared to be skeletons, and were holding urine bags, presumably because they had lost control of their bodily functions in captivity. And then I saw this crying woman whose two sons were among the skeleton-like prisoners, and she wouldn’t stop weeping.

Even if these people were suspected of being involved in terrorist activities, they did not deserve this kind of treatment. They should have been either charged with the crime or freed. And so if those whose job it is to uphold the law start doing what the terrorists do, then what is the difference between them and the latter?

In the hearing itself, the lawyer for the various intelligence agencies who had been made respondents in the petition submitted in writing to the court that the media and civil society were portraying them negatively, almost as if they were enemies.

So while much is made of the media being a very important pillar of today’s society – and there is no doubt that it is – people should realise that there is also immense pressure on it from various actors.