The miseries of a Pakistani graduate 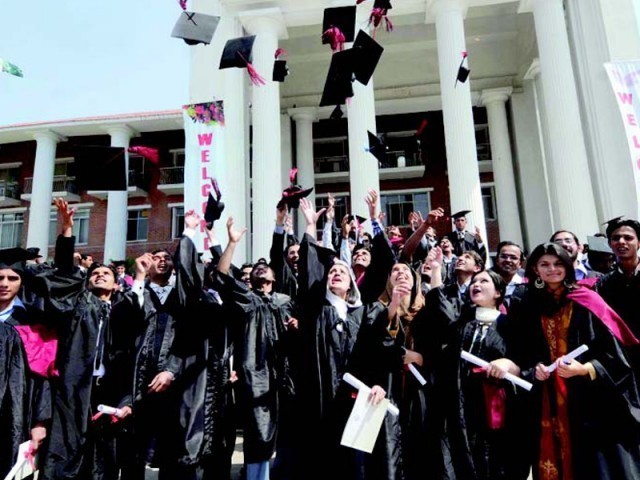 Children, from an early age, are fed the fact that if you study hard you will become a 'bara aadmi' one day. PHOTO: NNI

So what runs in the mind of an average middle class Pakistani when investing a large proportion of its income into their child’s education? An educated person can add value to society, take mature decisions, know the difference between right and wrong and use his skills to bring prosperity and well-being in general. Sadly, all these factors are secondary; the only primary focus in the mind of most families is the monetary return that education can bring.

From an early age, children are told that if they study hard they will become a ‘bara aadmi’ one day. So how exactly is the bara aadmi linked with studying well? Why is it necessary to be one? And the most important question is, who actually is the bara aadmi?

The bara admi is an abstract concept relating to someone who is rich, has a greater say in society, has enough authority to be above rules and is generally a man with toadies roaming around him. Such is the concept in the eyes of many parents; aspiring to change their status, they often see their child as a ticket out. A typical view is:

This dream about attaining education is etched in the minds of students from a young age, which leads them to follow market trends and scope of wealth rather than identifying their talents and capitalising on the areas they were innately capable of.

Two decades ago we saw countless doctors and engineers graduating, which was followed by the era of information technology and today we are witnessing a horde of students going in the direction of business education. Within this category, we see students pursuing CFA blindly, so much so that every other finance graduate is holding a CFA level one certificate, not understanding that certification is for a specific field with limited scope. There is also a new trend of students following the fields of actuaries so much so that commercial universities have started offering guidance in such a specified area.

But why? The ultimate dream of earning a huge sum!

This mindset ensures that students keep on running hard (sometimes panting and gasping for breath) towards a desired direction on a path which they are not even sure about.This mindset is totally flawed and I believe schools should play a role in mentoring and conselling children from a young age so that thay are in a position to take mature decisions and be in the right state of mind from a young age, in terms of choosing their profession.

Each year in Pakistan, aggregating just the top five business schools, we have more than 2000 business graduates who can not be accommodated in the already shrinking industry. In addition to that there is minimal guidance at university level about the right career path one has to follow and an even limited focus on entrepreneurship. Once graduated, even from a top or modest school, and without a job, a graduate starts to wonder whether he followed the right path or not.

If  you open the list of programs offered by a foreign university, you will be delighted to observe the most unique of the degrees and areas available to pursue. Without the pressure of turning fortunes and given the various fields to choose upon, students pursue areas towards which they are intrinsically inclined.

The fact is if you are passionate and focused about something, success, satisfaction and even money will come to you.

A graduate from LUMS with a BSc in Economics who currently works as a management trainee for Coca Cola Beverages Pakistan Limited in Lahore.