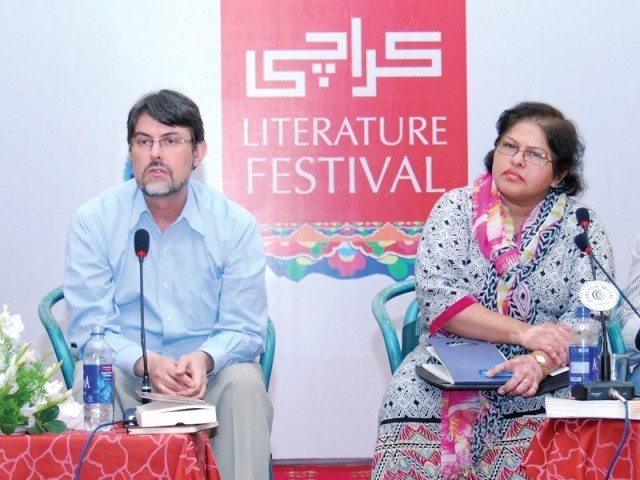 Lieven was grilled by Siddiqa on his book. PHOTO: ARIF SOOMRO

The stage is a dark, treacherous place where under the glare of the spotlight, the bait doesn’t realise when it becomes the catch.

Or so happened to a military analyst who, as a moderator of discussion on electronic media, impressed upon her panellists to not attempt and be an authority on subjects they have little command over.

It started all too innocently with a joke on tables being turned.

On the judgment day, Marilyn Monroe was found to be in Zia’s lap. Befuddled observers were informed that this is not Zia’s reward, but Monroe’s punishment.

Her first question: what are your ‘qualifications’?

The panellists, otherwise shrill and boisterous, were not just taken aback but started meekily listing their experiences. The answers were not surprising, but nonetheless interesting. The more humble of the anchors had decades of print experience behind them. The particularly shrill ones, however, were the product of post-2001 media boom. No pun there.

Next question: why do anchors lead their guests in a particular direction, ie, why do they have an agenda? The moderator cited several examples from shows she’d either participated in, or had watched on YouTube. Fair enough. Sensible allegation. The discussion heated up.

But then bang came the moderator’s fall. Siddiqa, a researcher by profession, attempted to discredit her panel by insisting that by virtue of not being experts, and she meant the academic kind, like herself, they were not qualified for giving opinions in their programmes.

But wait, didn’t you just give an opinion on how a panel anchor ought to run their programme, without being a qualified anchor yourself? Or did you think it’s kosher to do so because, really, who needs to be qualified to be an anchor? And your insistence that “all over the world, anchors never give their opinions” is not just false, but also a case of generalisation a college freshman would avoid, much less a professional researcher.

I walked out. This had turned out to be another current affairs programme we’d come here to critique. Even the mighty fall.

The bag that worked