Whose flag is it anyway? 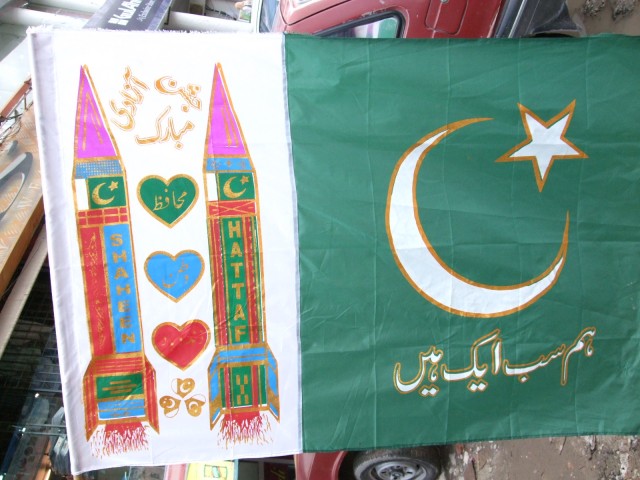 The Pakistani flag is adulterated by symbols, figures and slogans every independence day

1)      A Pakistani flag with Mickey Mouse inserted next to the crescent. Good ‘ol Mickey is also waving a Pakistani flag, while licking a lollypop.

2)      Various denominations of the Pakistani flag itself. The size tends to vary, while maintaining a consistent green colour is a particular challenge. Either the crescent or star is too big or too small, or the white bar is shrunk to accommodate the insertion of a foreign character.

3)      Several Pakistani flags can be seen with the Chagai hills inserted into them. At one time Dr. Abdul Qadeer Khan was a popular portrait seen on many Pakistani flags.

4)      A variety of slogans are also inserted below the star and crescent.

5)      Golden or silver frills and borders are added to the flag.

As the picture above illustrates, whether its Jinnah or Hatf and Shaheen missiles, enough is enough! Is it too much to ask that on our Independence day we at the very least maintain the sanctity of our own flag?

Our flag is symbolic of the very notion of the Pakistani state. It recognises the Muslim majority, Pakistan a nation connected with Islam, while at the same time, the flag also recognizes non-Muslims as Pakistani citizens. In the troubled times that we live in, the adulteration of what is, and should be a unifying symbol with slogans and pictures; disregarding this symbolism and significance, is disappointing to say the least.

So perhaps on this August 14, celebrated in the shadow of untold misery across the country, we can unite before our one, real flag.