Infinity and beyond: Space exploration for Pakistan 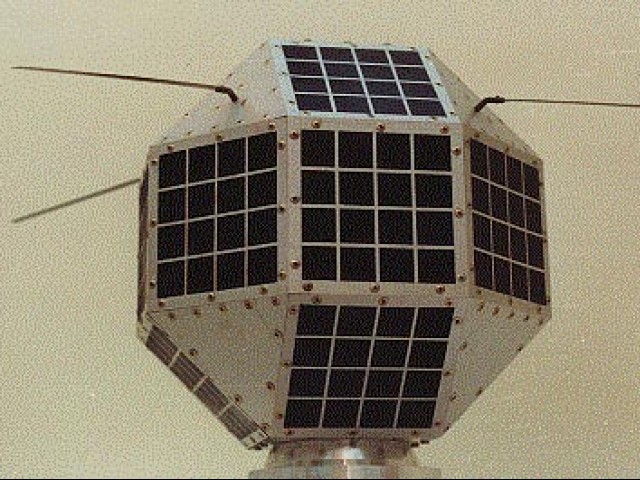 July 21, 1969 was seen by many as the culmination of man’s evolution from a cave-inhabiting savage to an astronaut. That landing on the moon owed more to the imagination overdrive of the Western civilization than the technological advancements of the time. Looking at it from a purely economic point of view, it would be safe to say that space programs around the world have introduced spin-off technologies that have actually sped up human technological evolution and had a major impact on our daily lives.

Now let us descend from the lofty heights of the western civilisation’s achievements in space and have a look at our own space program. Having relatively encouraging beginnings, our national space program was the brain child of Dr Abdus Salaam and with our test two-stage space rocket firing on June 7, 1961, Pakistan became the third Asian country and the 10th in the world to achieve this milestone. And as time progressed, Pakistan launched a couple of satellites into space including Badr1, PakSat-1 and 1-R. Although it is commendable that we have at least a presence in space, our enthusiasm must not end here.

At present, it seems that SUPARCO, while functioning to meet standard requirements of remote sensing, mapping and satellite communications, is missing the fabled ‘spark’ that might make it an economic pillar of the country rather than being a docile space agency that relies on Chinese technology and launching sites to send a precious few satellites into space and renting already orbiting satellites ( like Pak Sat-1). Its budget is less than even Ukraine, Belgium or Iran’s space agencies and competition with India’s ISRO is hopelessly out of the question at the moment. Concerning space sciences, Karachi University’s space sciences institute ISPA is suffering from neglect, so much so that the class rooms have broken light bulbs, the whole facility is running on generators and the only “powerful” telescope provided is malfunctioning and hopelessly obsolete – I wish that was an exaggeration.

It seems that the government, corporate institutions and the common people have not yet fully realised the importance of space sciences for a country’s economy. An effective and active space program can help boost a country’s economy in more ways than anticipated. There are uses of space technology in agriculture, medicine, GPS, and many other areas. The enriched baby food used today owes its origins to NASA, from back in the days of the Apollo missions. It doesn’t take an economist to realise that the spin offs from space missions like the Apollo missions have resulted in the growth of several multi-billion dollar industries from which the USA has benefited incredibly. Scott Hubbard, former NASA scientist, now working at Stanford University, notes that for every 1 dollar invested in NASA projects $7-8 worth of goods are produced in the industry.

These are the facts that our nation needs to realise.

The future of earthlings lies out there in space. Now, one might argue that Pakistan already has enough expenses on its plate without adding space exploration expenditures to the list. However, if we don’t catch up with the changing times then we might be left woefully behind. India has already sent an unmanned spacecraft to the moon and is on its way to becoming a major space power, leaving Pakistan to squabble with the US and Afghanistan over petty issues and countering home grown fundamentalism.

The question is not about whether Pakistan should takes giant leaps in advancing its space program but about whether Pakistan would be economically able to stand in the comity of nations. Is our entrepreneurial spirit so dead that we can’t even imagine the possibility of Pakistan’s space age? Recently I wrote a blog about putting a Pakistani on the moon. Ludicrous though it sounds, the purpose of that article was to observe the imaginative power and the entrepreneurial zeal of my fellow Pakistani readers. Many blog sites in the Pakistani blogdom refused to even publish that (except for a couple). It makes me wonder if Jules Verne was denied publication rights to Journey to the Moon (a century before the Apollo missions) by the French, just because it was highly ludicrous. It is that imaginative power and spirit – not squabbling over vague religious doctrines – that propels nations to excel in economics, science and technology.

The satellites that are in operation are Pak Sat-1, Pak Sat1-R, and the Badr Series satellites. Suparco has planned to launch an optical imagery satellite soon and a high resolution remote sensing satellite by the year 2014. These plans are integrated within the Space Program 2040, whose purpose is to present the full benefits of space technology to the nation. As commendable as these steps may be, an active effort still has to be made to make the public aware of these achievements. A crop of scientists and engineers has to be cultivated so that the future growth of Pakistani space program is not moribund. Since Suparco is still dependent on Chinese and Russian technology to develop satellite, communication and launch systems, to launch a truly indigenous satellite and space vehicle efforts have to be made to promote space technology in our schools, universities and colleges. If we can build sophisticated weapons of mass destruction, why not use the same technologies in areas of science and technology.

If there is a time for Pakistan to make a giant leap then now is that time. With a stagnant space administration, lack of education and research in space sciences, if we can overcome the institutional barriers to stop us from succeeding there is nothing to stop our minds.

If Pakistan is to survive for a thousand years then the time for developing a comprehensive space exploration strategy is now!