Who cares about Pakistan’s Anna Hazare? 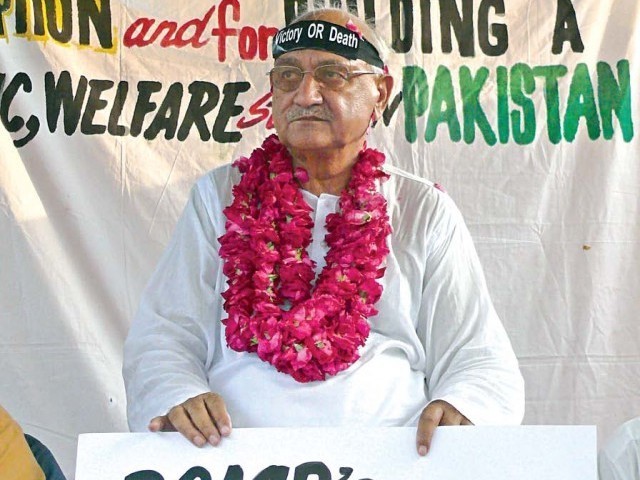 The success of the Indian anti-corruption activist Anna Hazare and the defeat of his Pakistani counterpart Jehangir Akhtar in their almost similar missions perhaps reflect the nature of politics and how it is perceived in both countries.

The 75-year-old Indian shot to fame, thanks largely to the power of the Indian media, when he undertook a much hyped fast. That, more or less, brought the Indian government to its knees and made it agree to move a bill in parliament to establish the office of an ombudsman (Lokpal).

However, in Pakistan, the story was quite different with the fasting Akhtar largely ignored by the press and the media and his voice against corruption faded into the wilderness. Pakistanis obviously have no problem with corruption, it would seem.

From April to December 2011, around 45 television channels, including foreign ones, had been covering Anna’s demand to bring the Indian parliament, the country’s bureaucracy and the CBI’s anti-corruption wing under the scanner of the proposed Lokpal law. The publicity has converted this old social worker into a saint in just over eight months.

I happened to be in India around that time and visited Jantar Mantar, the place in Delhi where Anna was undertaking the fast. Hundreds of his supporters were selling ‘Anna caps’ and taking signatures of the participants who had come to what was a peaceful sit-in. Most of those who had come seemed to have no personal acquaintance with the man but were there because they thought that finally someone was willing to take a stand on corruption in government.

As members of Team Anna eventually ended their nine-month demonstration last month, the revolution met its natural end with the passing of the Lokpal Bill by the Lok Sabha only but before Rajya Sabha it was adjourned. Across the border in the pious Land of the Pure, the demands of Jehangir Akhtar, could not receive any attention, or any notice by any official of the government or member of parliament.

The Pakistani media virtually ignored his protest. However, its members took active part in a dinner that he arranged for the press. After digging deep into biryani and balti gosht they left. But hardly a word appeared about Akhtar and his demands in the press the next day.