Who is watching the social media wardens? 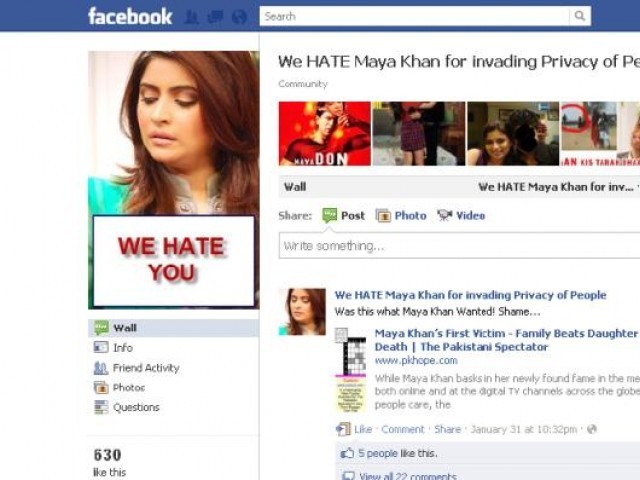 Our increasingly active social media is polarizing the two divides in our society: that of conservatives and liberals.

The recent issue of Maya Khan vigilantism and the subsequent uproar that ensued in the social media, resulting in the termination of the said anchor and her team, has brought to fore a number of questions. Whereas I wholeheartedly ascribe to the widely held opinion that this is a major victory for the liberal coterie which is otherwise known for keyboard ‘jihad’ alone, I have my contentions.

Let’s not put down the entire thing to a liberal win. The impact of the social media’s protest over this issue, in particular, was hugely galvanised because it struck a chord with a vast majority. In principle, nearly every person who saw the show and was not a mullah or a cranky old aunty with religious notions of Ziaul Haq, was horrified. And that, precisely, is what took the dissent to a proportion where Samaa TV was eventually forced to take down the show and sack the perpetrators.

That being said, it doesn’t diminish the significance of social media as a very effective medium. It has been central to many civil movements around the globe, from the Arab Spring to Occupy Wall Street. But we have to pause here for a second and see if the role of social media in Pakistan is overstated. The Maya Khan episode was perhaps the only occasion where social media did play a decisive role. There have been numerous other issues over which Twitter was clogged with dissident discourse and Facebook statuses sprung up to register protests and yet it all resulted in absolutely nothing. One such case in point: Salman Taseer’s assassination.

This brings me to the chief point of my contention: perhaps, the increasingly active social media is, at the same time, polarising the two divides in our society – that of conservatives and liberals. While liberals have traditionally been aloof from Urdu dailys and widespread publications, they have now found a new medium in Twitter and Facebook to actively further their point of view. But at the same time, this seems to be happening at the cost of an erosion of liberals’ presence in the streets which now seem crowded by banned terrorist outfits openly rallying in provincial capitals and claiming to bring back the glory of an Islamic caliphate.

At the same time, there is also the problem of social media etiquette which was highlighted in the anti-Maya Khan campaign. When lambasting a person for invading other’s privacy, how fair is it to publish her personal pictures on Facebook and Twitter and dig deep into her personal background to reveal anything that may remotely amuse a furious audience? The importance of this question couldn’t be more pronounced as millions of Pakistanis flock to these sites which are fast becoming the next ‘main’ mode of public conversations. We saw the manifestation of this phenomenon well when a video of Mansoor Ijaz was widely used to take cheap sling shots at his personal life. If the propriety of a public conversation can’t be observed by social media, there’s no point in the same social media pointing fingers at others.

A concerted effort has been launched by eminent journalists and media personnel to agree to definite set of rules which shall serve as self-regulatory inunctions for TV channels. A similar measure should also be taken for the social media which asserts its position as a portion of citizen journalism and yet is far removed from any journalistic norms. There’s already a raging debate in the West over where the line should be drawn for social media commentators and we ought to address it before social media becomes the next vigilante. It’s essentially the same age-old question of who will guard the guards.