Battles at the Premier League 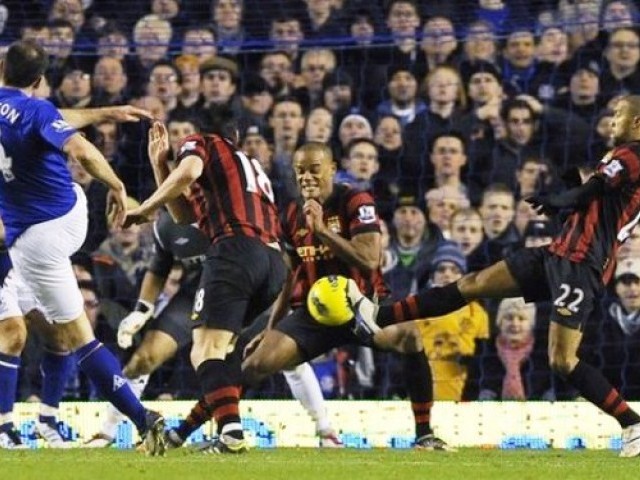 Darren Gibson, from local rivals Manchester United sold to Everton earlier in the month, scored the only goal of the game and sent Manchester City crashing to an away defeat. PHOTO: REUTERS

This mid-week in Premier League saw some interesting battles being fought at the top half of the table as well as between the relegation bound teams. It was also one of the rare occasions when the match day’s late kick-off (7:45 pm) nearly collided with the Transfer Day deadline that ended at 11:00 pm. All this made for an exciting day.

Let’s start from football itself from the top half.

Manchester City, fuelled by the Arab Oil-gazillions, started the week right at the top of the table and determined to tighten it grasp on the No.1 spot after being dumped out of the Carling Cup by Liverpool. They made a short trip to the Merseyside to face Everton at Goodison Park and needed only a point to stay ahead of the chasing pack and keep hold of the bragging rights over their neighbours Manchester United. However, the script didn’t go exactly to the plan as an outcast (Darren Gibson) from local rivals Manchester United sold to Everton earlier in the month scored the only goal of the game and sent Manchester City crashing to an away defeat.

Meanwhile, back in Manchester, United were facing Stoke and cruised to a 2-0 victory that took them level on points at the top of the league. There was a comfortable home victory for Tottenham, the surprise package in the title race this season, against Wigan and a very lucky away point secured in the very last minute of the match for a 10-men Chelsea against the impressive Swansea to secure the final spot in the top 4 that promises champions league next season.

The other two teams competing for the top four finish Arsenal and Liverpool faced tricky away fixtures to Bolton and Wolverhampton respectively. Arsenal lost some ground with a frustrating 0-0 draw with Bolton whereas Liverpool gained two points on the fourth placed Chelsea with an impressive 3-0 win.

At the bottom of the table, there are quite a few teams that are fighting the relegation battle. Wigan lost to Tottenham and therefore still glued to the extreme bottom with 15 points. Wolves are on a worse run of results since September last year and another 3-0 loss at home to the resurgent Liverpool meant that they stay in the bottom three. Only two points separate Blackburn from getting out of the relegation zone after they somehow failed to beat Newcastle at home even though they were the best team on the pitch. Bolton and QPR continue to flirt with the relegation zone and next few weeks will be very interesting in deciding the relegation survival.

The January transfer window this season didn’t bring up any surprises or major deals as the total outlay never exceeded £70 million as compared to last season’s winter window where £85 million was spent on two players only. The busiest clubs in this transfer window were QPR, Everton and Tottenham. QPR were desperate to spend some money in order to fight their way as far away from relegation as they can and brought in ex-Liverpool striker Cisse and Fulham striker Zamora, who was re-united with his old boss Mark Hughes. Everton were able to sign the Croatian striker Jelavic from the Scottish club Rangers for £5.5 million and also signed Gibson from Manchester United very early in the window. There was also a welcome return back to Everton, on loan, for Steven Peinnar who couldn’t find a starting place in the Tottenham side this season. This loan deal however had a bizarre twist as it saw Saha move the other way. It is difficult to understand the logic behind Tottenham adding a complete out-of-form and injury prone 33-year-old striker to their ranks. To make it more bizarre, Tottenham went on to buy a 34 year old out-of-contract defender, Ryan Nelson, from struggling Blackburn.

The upcoming week brings in a couple of more excitable matches where Manchester United visit Chelsea and Tottenham visitLiverpoolat Anfield. The results of these two matches will have a considerable effect on the title race as well as the race to finish in the top four. This season is turning out to be a very interesting one with only a few points separating the top three teams and a possibility of a new champion after a long dominance of two usual suspects Manchester United and Chelsea.

A Brunel University graduate working in Lancashire, UK. He blogs at salloos.wordpress.com/ and tweets @Ahmed_Saleem