Politicising floods: The roasting of Zardari 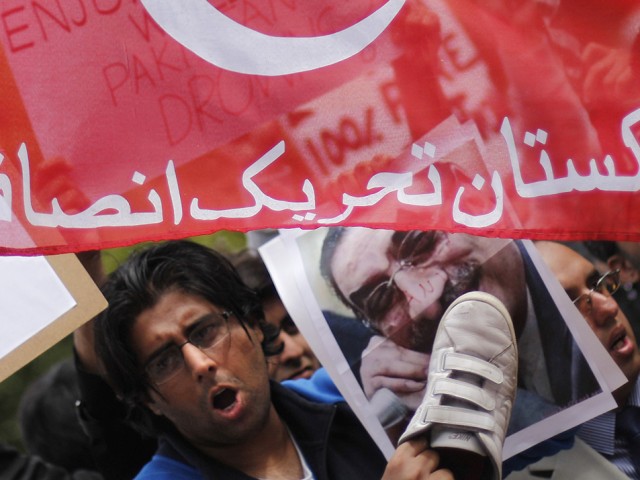 A protester holds up a shoe among a crowd of PTI supporters protesting President Zardari's UK visit. PHOTO: REUTERS

Our nation’s penchant for politics has found a new punching bag for the ongoing flood crisis: President Asif Ali Zardari and his ill-fated UK trip.

The question that bothers me is whether this is really the appropriate response to a crisis of a magnitude which extends even beyond the Pakistan Army’s ongoing efforts, let alone that of a single man, who to his credit, has donated 2.5 million pounds and launched the UK end of aid collection with fair success.

I distinctly recall the 18th amendment reducing the Presidency to a figure head for the country (representing us in other countries being his domain), with the Prime Minister being assigned the role of principle caretaker and decision maker. Kudos to Prime Minister Gilani; he has been doing his part, visiting affected regions, encouraging people to help in relief efforts, and doling out cash to affectees (and if some of those affectees turn out to be frauds, it is not a reflection on Gilani’s shortcomings but that of the people involved).

So why is President Zardari taking such a hit in our media? There are a number of alternative points of view available in the ongoing discourse, most of which do not make their way to broadcast media.

One view is that the PML-N has once again cashed in on populist politics and used its influence in the media to project Zardari as evil-incarnate. Another is that the media has decided to attack Zardari in a no-brainer unification of two entirely independent pieces of news (Zardari UK trip, ongoing floods) to come up with a sensational segment which appeals to the lowest common denominator i.e. mud-slinging makes good TV. President Zardari visiting the UK following Prime Minister David Cameron’s cutting remarks against Pakistan scores eight on ten in terms of sensationalism, but the state spending millions to send the President on a trip while a crisis grips the country is just plain off the charts.

Another viewpoint which has gone relatively amiss in the Zardari-flood fiasco is the fact that the UK is the PML-N and PTI’s adda, with well-connected/loyal followers and previously displayed street power to their name. Suffice to say it doesn’t take much to arrange a Zardari hate-fest, especially as the UK press had also opted to lift its news peg from aforementioned off-the-charts sensationalism. From there on out, it’s not hard to see how easy it would be to arrange to have a bunch of shoe-throwers in the crowd, no?

So what to make of this unusual interest in our President at a time when we have floods affecting millions in the country? How does a UK trip by Zardari suddenly trump target killings in Karachi, military operations in Fata, drowning people in Dir, to become headline numero uno? Is it political agenda, media sensationalism? Is it a reflection of a bitter, angry, crisis-ridden society just aching to see a (metaphoric) public hanging of its rulers, regardless of the futility of such venting?

I’m going to tick the ‘all the above’ box.