Is religion the opium of Pakistani masses? 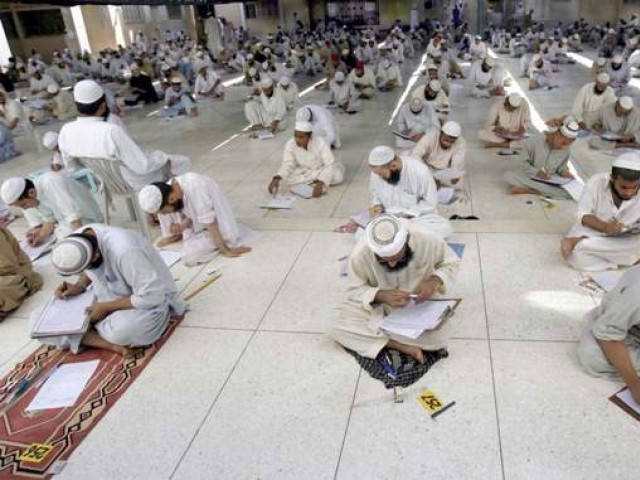 The poor tend to support religion more and governments in poor societies tend to use religion to help maintain social control. PHOTO: EXPRESS

Institutionalized religion can have a major social impact on society, for good or for evil. This blog is not concerned with discussing the ‘dogmatic’ aspect of religion; rather it revolves around religion’s impact on society.

Generally, it is the poorer societies that have the greatest proportion of the population following institutionalised religion. For this reason, religion tends to have a greater social impact in poorer societies, where it is supported more strongly by the majority. Either the religion controls the government or the government uses religion as an opiate in a majority-poverty society as influence.

When Karl Marx stated that “religion is the opium of the masses” he was perhaps referring to the abovementioned features existent in the state of Pakistan today – there is a majority following of institutionalised Islam and there is an abject condition of poverty prevalent in the state.

If religion can be equated to a drug, let us first determine why people resort to this opium in the first place. A person may take drugs under peer pressure, to get rid of unwanted physical pain, to be calmer, be happier or simply out of boredom. But the widely associated reasoning for taking drugs is that it is a temporary escape from one’s problems. Is religion then, also a temporary escape from reality whereby men create illusionary contentment about their prevalent condition of misery? In this sense, religion only helps men escape into a world where they have a ‘sense of belonging’. Religion is then perhaps the self-consciousness and self-esteem of a man who has either not yet won through to himself, or has already lost himself again as stated by Marx.

In this perspective, a religion like institutionalised Islam that promises a better Afterlife helps the poor to live with their poverty, exploitation and government oppression. For this reason, the poor tend to support religion more and governments in poor societies tend to use religion to help maintain social control.

The bitter truth is that for many in today’s Pakistan Islam is no more a sense of spiritual connection with the Creator, but rather a politicised phenomenon with a hidden conflict between the ‘haves’ and ‘have-nots’. The ‘haves’ in Pakistan are those in places of authority who have the state in their hands as an instrument of oppression to control the ‘have-nots’ and, thereby indulge in practices of corruption. In this process, the rich have become richer, as we have witnessed, and the common people no longer have access to the basic necessities of life as the welfarist phenomenon in Pakistan has become extinct.

Institutionalised Islam is, therefore, the next available option to fill the gap that the failure of the Pakistani state has created. It has become the opium of the masses as it provides an alternative to the deteriorating condition occasioned by mismanagement in governance of the state. Poor societies are more inclined towards institutionalised religion (in the form of madrassas, for example) for the simple reason that they serve as a point at which the outcry of the common people is heard. This way, the poor are able to find some relief from the despondency which may have been created by the state’s failure to provide the basic necessities of life.

It is, therefore, not unusual to find the ‘have-nots’ resort to madrassas that provide welfare, counselling, prayer and service – functions of providing the basic necessities of roti, kapra aur makaan (food, clothing and shelter) originally assigned to the state. Unfortunately, institutionalised religion in Pakistan has been used to promote evil rather than good with some madrassas promoting radical extremist activity under the banner of religion and welfare.

In the context of Pakistan, I feel Islam was and is still today, the opium of our troubled masses. However, it appears that religion has merely served as a temporary medication to the disease of oppression and poverty. Historically, an oppressed minority condition in pre-partition India led the Muslims to drug themselves with the religious-opium.

Until Pakistan remains in a condition of poverty, madrassas will continue to influence the ‘have-nots’ in a negative way.

While the ‘haves’ so far have chose to turn a blind eye to the ‘have-nots’ for temporary gains, it is perhaps time for them to realise that the same institutionalised religion can serve as an ally of the government if revolutionised or reformed strategically with balanced interests and promulgation of modern Islamism.

The darker side of this story is that a majority force so destructive in nature will rise very soon that it will probably endanger the existence of Pakistan. The need of the time is to create economic alternatives for the people of Pakistan and ensure a smooth transfer from a condition of illusionary religious existence to economic reality. If such a shift can be achieved through institutionalised religion, it is perhaps not such a bad idea to make use of it.

Note: This article is not a reflection of the writers’ religious views.