Team Misbah did us proud 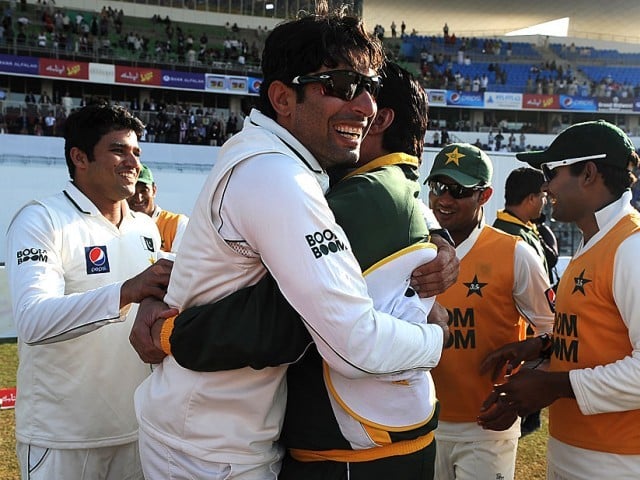 It was heartening to see the unity within the team; the way they celebrated each others’ wickets, the way the bowlers supported each other and the batsmen praised each other - it's not something you usually associate with the Pakistan team. PHOTO: AFP

Victory against any opposition is sweet. But when you win against the world’s top Test team, it is memorable. Pakistan beating England by 72 runs last week has to go down as one of the best successes of the Pakistan cricket team.

Defending just 145 against one of the best batting line ups of the world would have been a tough job in any case, but Pakistan never let England off the hook. Surprisingly, the chief destroyer was Abdur Rehman who grabbed six wickets for 25 runs in just 10.1 overs. Saeed Ajmal supported him well with three wickets for 22, becoming the fastest bowler to reach 100 wickets in Test matches for Pakistan.

Apart from the brilliant performance by our spin bowlers, one must not forget the contribution of the young middle order batsmen of Pakistan, Azhar Ali and Asad Shafiq, who absorbed enormous pressure when Pakistan were 54 at the loss of four wickets in the second innings. They added a precious 88 runs which turned out to be the telling difference at the end.

This was the second lowest total defended in the fourth innings by any team and the fifth time that England lost after having to chase a target of 145 or less.

All eyes were on coach Mohsin Khan sitting in the dressing room, reacting to every delivery, praying, showing frustration when something went wrong, hugging the team when Pakistan got a wicket and rejoicing at the end when they won.

When the players were gathering around him in happiness, I wondered if there would still be a change of coach or whether this victory meant a permanent job for MK. It’s going to be a big decision to make for a team that is looking stable after such a long time, especially after Dave Whatmore is reportedly in talks to take up the position of coach with the Pakistan team.

Another heartening thing to see was the unity within the team; the way they celebrated each others’ wickets, the way the bowlers supported each other and the batsmen praised each other – it’s not something you usually associate with the Pakistan team. We may criticise the tactics of Misbahul Haq, the slow pace of the batsmen, the poor performance of the fast bowlers, but the fact is that Misbah is doing the job for us. Out of the 14 matches he has captained Team Pakistan, he has lost just one and won 8, without losing even a single series.

People who were of the view that this team performs well against minnows must change their views. Pakistan have beaten the best team in the world!

Although the team still has a long way to go, it is certainly not like previous ones – there is a spark. This team can do wonders, and more importantly we know it will give its 100% on the field. Good luck, Pakistan!