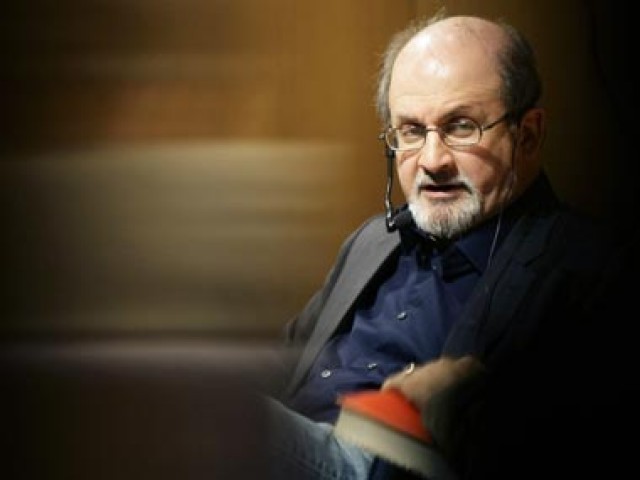 This year, Indian born British author Salman Rushdie was one of the attractions of the festival. PHOTO: REUTERS

An outsider who has never been part of the Jaipur Literature Festival wonders what goes on for four days in the Diggi Palace, a 16th century palace owned by one of the descendants of some nondescript feudal lords.

The day starts with four different sessions on varied issues running parallel in four different venues, aptly named Mughal Durbar, Mughal Tent and so on. Before lunch, three such sessions are held and writers interact with moderator and audience.

The same continues after the elaborate rich Rajasthani lunch and it ends at 6.30 pm. Then, the music session starts and soon after, the bar and dining areas are opened. Till 10.00 pm,  people enjoy the cocktail of music, drinks and dinner. The ambiance is infectious and the hip and happening crowd has a great time. The celebration continues for four days without any change…

Sometimes, the choice of venue demonstrates the value of an event. It symbolises the larger unintended meaning hidden in a festival. Jaipur is not known in popular Indian imagination as a place where great literature or works of art were born. People identify the place because of its history – the history of kings and kingdoms, of feudal behaviour and conduct.

Holding the Jaipur Literature Festival in the Pink City (as Jaipur is also known) alludes to all kinds of intent.

Is it related to the promotion of literature or tourism, or is it an extension of mall culture that is consuming the whole country gradually? Is it any different from the annual Dubai Shopping Festival or the Trade Fair that Delhi witnesses in the second week of November every year?

Today, the Jaipur Literature Festival is a well known event not because it has produced or patronised any new talent; but because of the controversy it has generated. People know that Jaipur is not only a pink and palatial city but a city of literature as well.

To prop up the TRP of the event, some big names were invited. This year, Indian born British author Salman Rushdie was one of the attractions of the festival. He was forced to be absent from the gathering but even his absence managed to give fillip to the literary jamboree.

If you look at the history of the festival in the last six years, you will notice that only best-selling authors who have gained fame or notoriety are invited. If the aim of such a venture is to enlighten people and inculcate value for literature, why have the organisers never thought to invite Noam Chomsky, Arundhati Roy or many other well known thinkers and dissenters of the prevailing cultural and political values of the world? These authors may not be glamorous names but are definitely individuals who question the status quo, and break the boundaries of conformism.

This brings me to my point: branding is important. In a world driven by market forces, no venture can remain aloof from such a ubiquitous force. The main sponsor of what is touted as one of the best literature festivals is an infrastructure developer called DSC Limited. By lending its name and money to the festival, the real estate developer has managed to expand its brand value. In return, the organisers  get much needed funds to sustain the show.

Modern kings and rulers are the corporate and business houses and people associated with literature look for their attention to survive. Jaipur gives a perfect historical background and inspiration to continue a tradition which has been a norm in the past when princes and principalities used to nurture artists and art.

As in the past, poets and artists who were blind conformists of present values survived under the patronage – those who never questioned the existing system.

Similarly, only those sticklers of conformism, whose rebellion suits the taste of the sponsors, made the list. Only those topics that do not challenge the existing value system come under discussion.

Of course, there was discussion on Kashmir or the Naxal problem. But they were like playing safe, with a helmet on. Freedom of expression was controlled and conducted. The moment some writers tried going out of the written script, they were asked to leave. This is what happened when writers like Amitabh Kumar and Hari Kunzru tried reading a few lines from the banned book “The Satanic Verses”.

The whole atmosphere is designed to serve only the cause of those who write in English. Hindi and Hindustani also come to be served by some popular names from the world of cinema like Gulzar, Javed Akhtar and Prasoon Joshi. Their romantic couplets enthrall the audience in the same way as any popular Bollywood songs titillate the senses.

One must admit that it’s a well packaged festival where people come in droves to be seen and to stroll around and listen to odd talks happening at several venues at the same time. There are also those who come for shopping- not for books but for designer clothes from the numerous shops put up at that time by popular designers.

The festival is not inclusive but exclusive. It does not give space to folk literature, and literature written in regional languages. In India where there are 18 officially recognised languages, the Jaipur literature festival ignored the voices of those who don’t read and write English, who are not part of popular linguistic narrative. Despite the demise of feudalism and principalities, literature has not come out of the palaces.

Diggi Palace creates a wedge between the two worlds and worldviews – one which is promoted by the corporate houses and other which is not part of the nouveaux riches circle.

At the end of four days, one wonders what has been gained in terms of intellectual advancement and in understanding of the present world. The festival is one more trap to corporatise our sensibilities and thoughts.