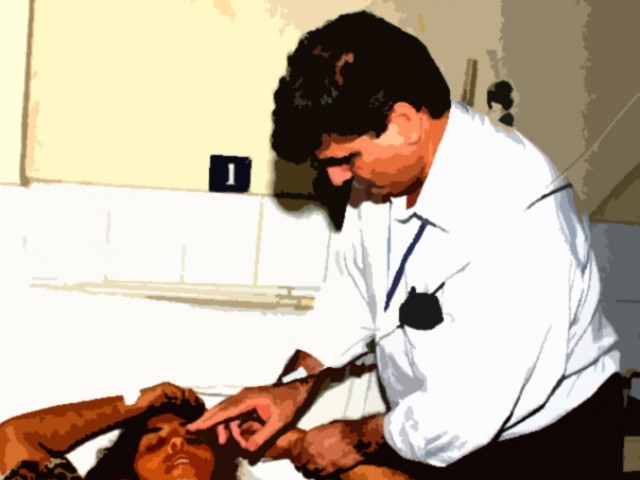 Pakistanis are in search of greener pastures, but most end up cutting tomatoes for restaurants, driving taxis and cleaning toilets. PHOTO: INP

In May last year an Australian embassy press release stated that more than 5,000 Pakistani students have chosen Australia as their destination to study.

How many of these people actually go abroad to study?

The answer is nil.

Living in Australia, I can say that 99% of these so-called students are actually professionals and underachievers of society who go abroad to seek a better life. Let’s face it: who would want to live in a country where there is daily load shedding, nepotism, corruption, government ineptitude and terrorism, right?

Although this Pakistani talent is moving out in search of greener pastures, the truth is that most of it is being put to use in cutting tomatoes for restaurants, driving taxis and cleaning toilets. This phenomenon is known as brain waste.

According to the Encyclopedia of World Economy , brain waste is defined as the underuse of migrant talent in the host country. In the same encyclopedia, which quotes Ozden’s 2006 study, it is mentioned that the brain use of Pakistani migrants is just 38%

The problem is that the toilet cleaner or that person who chops veggies in restaurants is a highly educated man or woman who might possess a masters or bachelors degree but can’t get a decent job. Misconceptions about race and religion are also important factors for Pakistanis being jobless or being caught in sub-standard jobs in the West.

Another important and closely related problem is the under utilisation of Pakistani talent. This means that even if you get a decent job in a high-rise building abroad, you will still face a barrier during job promotions and other office activities. This talent is being wasted in a foreign country. It should really be put to good use in Pakistan. This is why the brain drain in Pakistan and the subsequent brain waste are co-related. Hundreds of Pakistani doctors, engineers and IT professionals are working in super markets, packaging factories and restaurants abroad.

Many Pakistani students go away merely to secure a nationality. They do not even bother to show up for classes during the semester and appear only at the time of exams. After my recent encounters with some of these students, I realised that most are here in a foreign country to secure a better future for their families by sacrificing their own. Sadly, these people add nothing to the knowledge of the host country and finally become parasites. The labour that could have been done by any other common person is now being done by our doctors, scientists and engineers.

Recently, I met a former government teacher from Punjab who after being frustrated by low salaries moved to Australia to work in a kebab shop. All he wants is to earn enough money to move back to Pakistan and open a restaurant in five years, so that he and his family can live “happily ever after”.

After witnessing the government’s legendary acts of corruption, who can convince that poor teacher not to leave his job and pursue a career which is unsuitable for him? The truth is that Asians generally choose their careers on the basis of a given situation and not their talent. Hence, Pakistan which already faces a shortage of teachers, is short of one more.

Who knows how many other doctors, engineers and scientists will leave Pakistan to be contractors, taxi drivers and restaurant owners at the expense of their true skill?

Unfortunately, these talented and highly skilled individuals will remain unutilised unless something substantial is done to stop this brain waste and restore normalcy in the state of Pakistan.

Correction: Due to an editing error, an earlier version of this post incorrectly stated that the writer is a resident in Australia. He is in his last semester in an Australian university.