Conspiracy theories and the bilateral process 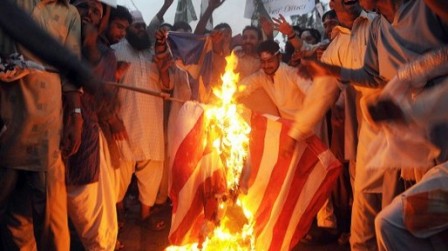 The government is compelled to see people getting more infuriated, hawkish and extremist against countries like India, America or Israel. PHOTO: AFP

Conspiracy theories in current times are adjusting to our youth. Have you ever wondered about the reasons that make conspiracy theories easily impact the minds of people? There are quite a number of reasons, the foremost being that many of us love fiction and mysteries, and another being a simple lack of education. But in Pakistan, perhaps the most important is the trust deficit between the people and the respective governmental institutions or the whole government machinery.

Conspiracy theories proliferating in society or a country reflect a bilateral connection between the respective government and its people – both hermetically connected to each other. How? Let’s take into account the case of Zaid Hamid. I’d not blame the stalwarts of Zaid Hamid who’re in these times following the hawkish ideologies of the man because, as I said, it’s a bilateral process. One needs to understand that the people of Pakistan are frustrated and provoked over the stalemate on most serious long-standing issues between India and Pakistan; for instance: water issue, Kashmir issue, unprovoked border forces fire from Indian side, the involvement of Indian security agencies in the affairs of Pakistan and so forth.

I’m not a supporter of Zaid Hamid, neither do I like his hawkish rhetoric and cliches. But then, I think Zaid Hamid doesn’t reflect both sides of the coin. One side of the coin is Zaid Hamid. The other side of the coin is the failed government. The government has failed to satisfy the needs of the people. And that government’s failure of not dealing with serious problems of Pakistan is leading to the ire in the youth against India.

In the same way, there are conspiracy theories regarding United States of America: the usage of Pakistani bases to perform the drone attacks assignment, which is killing many innocent Pakistanis; the role of American Intelligence Agencies in Pakistan including the abduction of Pakistanis by CIA and FBI; the Blackwater issue; the dubious role of America on Kashmir issue, the failure of American-led Nato forces in Afghanistan and so forth. Again, this all is leading to the ire in the people of Pakistan against United States of America. The reasons are quite valid given that 9 years of war has brought no convincing result until the present time.

In either case, conspiracy theories are evolved and adopted by the people because of the failure of the respective government which cannot grapple the issues. Or to state the matter differently, there’s a huge trust deficit between the people and the government because their voices and judgement and opinion are perennially overlooked by government.

I’m nowhere near to asserting the idea that the above mentioned reason is the “only” ingredient that helps in accommodating conspiracy theories in our judgments and opinions. But give me one reason why people shouldn’t fall prey to these conspiracy theories — the rhetoric and cliches of some media analysts, as it’s called — when government has critically failed to comply with the demands of the people, and as mentioned above too: like the water issue with India, Kashmir issue, illegal abduction of Pakistanis and so on.

People have the right to make choices too and they will make the choices “automatically” – and maybe at times the wrong choices – when the government feebly gives this impression that it’s reluctant to solve the problems people are facing perpetually. According to the previously mentioned scenario on the bilateral process with regards to conspiracy theories, there is only one solution:

government should pay careful attention to the sentiments and needs of the people. If not, the government will be witness to people getting more infuriated, hawkish and extremist against countries like India, America or Israel, when their voices are not given a careful consideration. Those people who strictly denounce the conspiracy theorists should also not blame the youths who fall prey to conspiracy theories, because the coin is always bi-facial — both faces different.